The aim of ISKID is to ensure cooperation between all of the members who are manufacturers   and/or   distributors   of HVAC&R equipment,  to involve itself in efforts and undertakings concerned with solving   problems of members, to protect the rights of Turkish air conditioning and refrigeration consumers and firms on national and international levels, and to perform necessary efforts to satisfy the country's various heating, cooling and air conditioning needs while considering the environmental issues.

HISTORY
ISKID was established in 1993. Establishment studies started in1991 were completed in 17th May 1993 with the first meeting of the Board of Directors. Air conditioning industry started in Turkey in 1950's and showed an accelerating improvement. ISKID was established to ensure a healthy, effective and systematic development of the air conditioning sector in Turkey. Members of ISKID are persons representing A/C and refrigeration companies.  For the membership, to  produce  or  distribute  at  least one air conditioning or refrigeration device is essential. ISKID is a member of EUROVENT/CECOMAF since 1997.Today, ISKID has
43 member companies.

Coverage:  An important percentage  of  the  Turkish air  conditioning manufacturer and distributor firms are united to form ISKID.

Statistics: By preparing annual statistics, ISKID shows the size of Turkish  air  conditioning  sector,  since 1994. ISKID annual statistics are the most reliable and comprehensive source for the Turkish HVAC&R market.

International: Thanks to its EUROVENT/CECOMAF membership,  ISKID acts as a bridge between Turkish and European industries. In the year of 2000, EUROVENT/CECOMAF General Assembly took place in Istanbul,  together  with ICARMA meeting. Relations between ARI and ISKID are also improving.

Export:   The Export  Committee  of ISKID is established to increase the export rate of the members, utilizing already available high quality, capacity, capability  and geo-strategically advantages of the HVAC&R sector in Turkey. Works like market research, advertising, attending international exhibitions with national pavilions are continuing. ISKID has also represented its members in various international exhibitions.

Government: A technical  committee formed by ISKID, prepared advises for the Unit Prices of the Ministry of Public Works. ISKID represents its members at government  level by  planning  law and regulations, such as additional VAT, Turkish standards and directives etc. Lately, a report on the A/C import,  production  and  after sales regimes in Turkey and the EU has been prepared.

Ethics:  Any possible unfair competition and behaviour of individual companies in the sector are being closely observed. An Ethics Document has been  prepared  and  accepted throughout the sector.

Public relations: ISKID's vision and important news about its members are being published in the periodical bulletin and web site of ISKID. To encourage air conditioning usage,  press  releases, meetings  and other studies are being done. 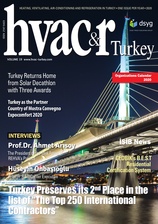