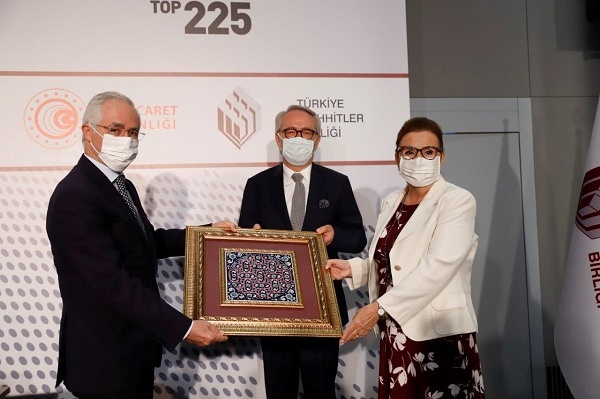 Despite the contraction in the global market, following the China, Turkey retained the second place in the world league in ‘’Top 250 International Contractors in the World’’, with 44 companies taking place. Top 10 construction companies in the list from Turkey were; RÖNESANS, LİMAK, TEKFEN, YAPI MERKEZİ, ANT YAPI, TAV, ENKA, MAPA, KOLİN and NUROL

Leading projects between the ones that are carried out by ‘’The Big League’’ are Lakhta Center from RÖNESANS, which is ranked as the tallest building of the Europe, combined project of LİMAK, which is in progress at the historical town center of Üsküp, TurkStream Receiving Terminal Project from TEKFEN, which transports the natural gas from Black Sea to Turkey, Dar Es Salaam-Morogoro High-speed Railway Line from YAPI MERKEZİ, which is a strategic route for Tazmania and ANT YAPI’s paramount project Grand Tower in Manhattan of Moscow. These projects were followed by big projects undertaken by TAV, ENKA, MAPA, KOLİN and NUROL.

The list of “Top 250 International Contractors in the World” published by the international construction industry magazine ENR (Engineering News Record), which is followed with great interest by the economic circles all over the world, and which is based on the revenues of the contractors from their activities carried outside their countries in the previous year, aroused interest in the economic circles.

39 companies out of 44, which are listed despite the global and national stagnation, and all of the top 10 Turkish contracting company in the list were the members of Turkish Contractors Association (TCA). Top 10 aforementioned companies were respectively Rönesans, Limak, Tekfen, Yapı Merkezi, Ant Yapı, TAV, Enka, Mapa, Kolin and Nurol.

Turkish companies carried the world before themselves
Drawing attention to the fact that 44 companies retained the second place, following China, in the ‘world’s big league’, 39 of which is a member of Turkish Contractors Association (TCA), despite the increasingly tough competition conditions and economic difficulties, TCA President Mithat Yenigün made the following evaluations regarding the issue:

“Most of our contractors, who were on the same list last year, managed to move up in the current list. In addition, according to the international project revenues of 2019, the number of our companies which rank among the top 100 companies in the 2020 list has increased, and one of our companies was among the top 30 international contractors in regard of the project revenue. All these achievements are also important in terms of highlighting our industry’s global competitive power increase. If we get stronger in terms of financing, we can succeed in increasing our international contracting services project amount to 50 billion USD, which we have increased to 20 billion USD annually.’’

1.    RÖNESANS: One of the latest projects of RÖNESANS, which holds the first place in Turkey list and which moved up to 23th place in world list, is the Lakhta Center constructed in St. Petersburg in Russia and which is the tallest building in Europe with 460 meters length. 20,000 people from 18 different countries worked in the construction of the center, which also includes an office area of 5,000 people. Metals used only for reinforced concrete foundation flooring are of sufficient size to build the Eiffel Tower from the top on down...
2.    LİMAK: LİMAK followed the Rönesans in the list, as in the last year. Üsküp Combined Utilization Project of Limak in North Macedonia, which ranked 61th in the world ranking in this year, draws attention. The project, which has a gross area of 325,000 square meters, is located on the axis that connects the historical city center to the business, hospital and police center of the city. Macedonia Boulevard is utilized as an underpass, and there are shopping malls, multi-storey car parks, hotel, office and residence towers on the pass.
3.    TEKFEN: Among the latest projects of TEKFEN, which ranked 65th in ENR list this year, TurkishStream Receiving Terminal Project comes to the forefront. The terminal, which starts near the Russian city of Anapa and runs along the Black Sea with a double-row pipeline of 930 kilometers each, was built in Kıyıköy, 100 kilometers from Istanbul and was opened with a ceremony by the presidents of the two countries in early 2020. By means of the project, the natural gas will be transported to Turkey through the Black Sea via 32-inch pipelines.
4.    YAPI MERKEZİ: One of the prominent projects of the YAPI MERKEZİ, ranked 78th on the list, was the 202-kilometer-long Dar es Salaam-Morogoro High-Speed Railway Line built in Tanzania. This line is the first and most important part of East Africa's fastest railway project between Dar es Salaam and Mwanza... The project will connect East Africa with the Indian Ocean as part of the central corridor connecting Uganda, Rwanda, the Democratic Republic of Congo and Tanzania.
5.    ANT YAPI: Rising to the 80th rank in the ENR list, ANT YAPI undertook the construction of the Grand Tower project in Moscow City, known as "Moscow's Manhattan". The total area of the center, known as the giant project, is 400,000 m2 and its height is 283 meters... The project, which includes apartments, office buildings and shopping centers, as well as sports facilities and conference hall, will be completed in 2022.
6.    TAV: TAV, ranked 84th in the list, has undertook the Hamad International Airport Terminal Building Expansion Project, one of the most important hubs in the world and the largest in the Gulf, together with its partners Midmac and Taisei. The project includes the construction of 170,000 square meters of additional terminal building to the Hamad International Airport Terminal Complex with a construction area of 550,000 m2, which the company previously completed with its Japanese partner Taisei in Doha, the capital of Qatar, and the surrounding works.
7.    ENKA: Ranking 86th in ENR's world list, ENKA draws attention with its Petroleum Processing Facility in Iraq's West Qurna 1 Oil Field. The new facility, built following the contract signed with ExxonMobil Iraq Limited company, can produce an average of 100,000 stock tank barrels/day of crude oil per year. The project was awarded the "Outstanding Achievement" award in the British Safety Council's "International Safety Awards 2019" competition. Furthermore, the project received the highest score among the attendants from Turkey and won the ‘’Best in Country’’ award and the project was selected as the Best Global Project of 2020 in the Energy and Industrial Project category by ENR a while ago.
8.    MAPA: Dubai Water Canal Sheikh Zayed Road Bridge Crossing Project stands out among the latest projects of MAPA, rising 35 places in the list at once and ranked 91st. The project, which is shown as one of the most prestigious works of the city, includes the construction of a 5-kilometer highway, including a 600-meter-long bridge. Despite challenging conditions, the project was completed and delivered before the contract period.
9.    KOLİN: KOLİN, another Turkish company that made a big leap in the world league last year, rose 57 places in the ENR list at once and ranked 94th. Among the projects that brought Kolin to success, the South Al Mutlaa Project, which was undertaken in Kuwait and where the infrastructure of a new city was established, is remarkable… The project includes the works of more than 150 kilometers of road construction, more than 40 bridges, over 1000 kilometers of infrastructure network piping, treatment facilities and pumping stations in the newly built city in an area of approximately 100 km2. One of the biggest projects of Kuwait Public Housing Administration…
10.    NUROL: One of the latest major projects of NUROL, which is counted among the top 10 list of Turkey again, is the Tizi Ouzou City East-West Highway Connection Project undertaken in Algeria... The project includes 48 kilometers of highways, a double tube tunnel with a total length of 2 x 1,670 meters, 21 viaducts, other art structures, infrastructure and drainage system manufacturing. 10 kilometers part of the project has been opened into use. The company ranks 109th in the ENR list.