2022 Mostra Covegno to Commence in Italy, with Turkey as the Partner Country 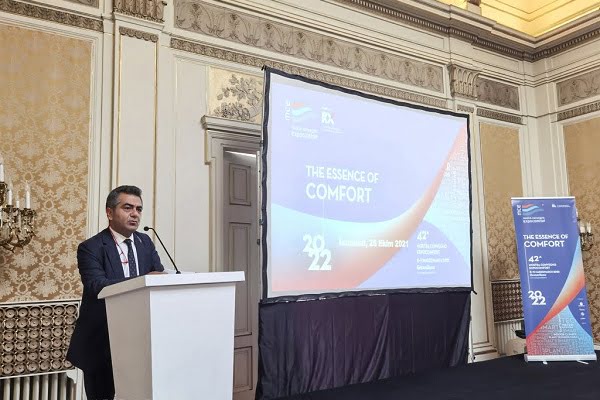 Turkey was named as the partner country in MCE – Mostra Convegno Expocomfort Fair 2022, which is a world-renowned event in air conditioning and renewable energy.

The launching event of the fair was held in Venice Palace in Italian Embassy with the participation of representatives from Turkish HVAC&R Exporters’ Association (İSİB), Italian Chamber of Commerce and Industry Association, and managers and officials from Reed Exhibitions Italia.

In his speech during the launching event Mehmet Şanal, President of Turkish HVAC&R Exporters’ Association underlined the importance of the fair for Turkish HVAC&R sector. Mr. Şanal also made the following remarks: “Mostra Convegno Expocomfort is one of the most important fairs in the world in the HVAC&R sector. Turkey will be the partner country in the fair’s 2022 edition. In the last edition of the fair before the pandemic, 2.388 companies exhibited their products in a total fair area of 325 thousand squares. 1.234 foreign companies attended the fair. 164 thousand people, including 42 thousand foreigners visited the fair. 114 Turkish companies attended the fair, making Turkey the foreign country with highest number of companies represented. We expect that Turkey’s role as the partner country in the fair in 2022 will positively affect the participation of Turkish companies. We are working in great rapport and coordination with our Italian counterparts and Italian Chamber of Commerce and Industry Association.”

Mr. Şanal also highlighted that Turkish companies applying for the fair will be prioritized due to Turkey’s role as the partner country, and Turkish companies will have better and higher number of places in the fair. Throughout the fair, special promotional events will be held, as Mr. Şanal said, and Turkey’s role as the partner country will be strongly underlined.