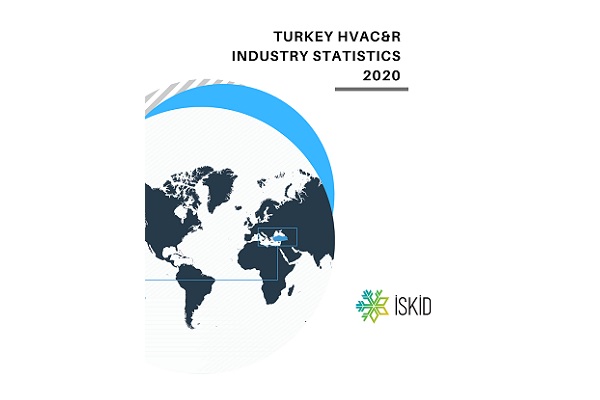 The event tackled the following matters: “ISKID Statistics Collection Method, Access to the System, Privacy Policy, Product Groups with Collected Data, How Statistics Become Available?”, “Market and Export Data in Turkey, Impacts of Covid-19 Pandemic on HVAC&R Industry and Current Situation.” A Question & Answer session was also held during the course of the webinar.

In his speech, ISKID Board Member and Member of Statistics Commission Volkan Arslan explained the methods of collecting and publishing ISKID Statistics. Stating that statistics data were collected from 97 ISKID members in a total of 27 product categories, Volkan Arslan reminded non-ISKID members could also provide data to their statistics efforts in related categories. Mr. Arslan added, “Companies sharing their data within the scope of ISKID's statistics activities will be offered reports on the relevant product groups, whereas companies choosing not to share their data can have these statistics reports through purchase.”

He added that İSKİD Statistics had been continuously improved since 1994, when they were first published. The data from the last three years have been collected from digital platforms, resulting in faster and more accurate publishing reports. Arslan said that confidentiality was one of the most delicate matters to tackle when collecting statistics, further underlining that the necessary measures were taken to implement the highest confidentiality level while establishing the digital structure. He concluded, “We will focus on increasing the number of companies participating and sharing their data for our statistics as well as publishing our statistics reports along with the future projection reports.”

ISKID Chairman Ozan Atasoy revealed some of the data on product groups in main categories, which were part of the Statistics 2020 data, collected with the participation of 73 companies.

Based on these statistics;

“Split Type Air-conditioner Market: According to the 5-year data on changes of the market; it appears that in 2017 and 2018 Turkish construction industry was among popular industries and the sales numbers of split type appliances were at the peak point. The retail market was seriously affected by the fluctuation in the exchange rate in August 2018. The stocks in the distribution channel could not be sold, and most of them became a decline in the 2019 numbers.

In 2020, the market detected a production-sales movement of over 1,5 million, achieving a growth number of 10%, outperforming the pre-crisis levels of 2019.

It is safe to say that family members who stayed, worked, and studied at home during the pandemic changed their shopping habits to improve their domestic comfort and consequently bought the types of air-conditioners that best suited their home, and such domestic purchases expanded the retail and wholesale markets.

VRF Market: The pandemic has caused a move towards the sea side areas for individuals, which resulted in a 9% year-on-year increase in the use of VRF units including the Mini VRF appliances.

Rooftop Air-Conditioner: Domestic sales of rooftop air-conditioners, frequently used at shopping malls and large markets, were low as the pandemic hit the shopping mall industry that has become saturated and therefore did not attract investments. However, as the market demand shifted to domestic products, we saw an increase in export figures while a decline in import figures.

Fancoil Market: Like the reasons in the rooftop AC market, the fancoil market has gradually shrunk in the last five years. Although the recession in 2019 has clearly affected the export figures, we saw an increase of 10% in production and a decline of 40% in imports in 2020, despite the pandemic. In this context, with such an increase in export and a decrease in import, fancoils are considered among successful products within the industry.

Air Handling Units: Sales figures of air handling units in Turkey have been continuously going up each year. Investments such as airports and city hospitals accounted for the increase in recent years. Also, fresh air supplies becoming even more important during the pandemic and more renovations being implemented indicate a continuous sales increase in these products.

Overseas sales figures have displayed a good ascent since 2017, going up by 20% in the last five years and 3.6% compared to 2019, with over 5 thousand units sold. Considering that there are nearly 50 manufacturers in this market, it is conceived that the production meets more than 90% of the domestic market's needs.

According to the production data, over 17 thousand air handling units were manufactured. Very few units were exported, resulting in meeting the domestic demand and increasing the export figures.

Chillers: The decline in the construction industry caused a severe shrinkage by 50% in chillers. Production in this category, which has traditionally had lower export figures, is usually carried out for the domestic market. With the postponed projects starting to be implemented in 2021, an increase in chillers is estimated.

Heat Exchangers - Coils: Data in this product group has revealed an increase of 9% in production. Export figures have shown a substantial increase nearly by 50% in the last five years and 10% compared to the previous year. The Turkish coil manufacturing industry expanded by 8.9% in 2020, based on the square meter data. This growth is about 3.5 times more than that of Turkish industrial production.”

“With its ability to easily embrace and implement the latest technology, produce according to energy efficiency standards, and offer environmental-friendly products which comply with the European Union regulations, our country acts as a production base for air-conditioning industry, 90 percent of which is represented by ISKID,” said Ozan Atasoy, after having explained the industry data.

Atasoy continued, “Such achievements have helped our industry to quickly adapt to the changing conditions with the pandemic. Our industry has mainly focused on implementing air-conditioning systems supplying 100% fresh air, using HEPA filters, as well as improving Indoor Air Quality.”