Testing laboratory established by Aironn, which has acquired the AMCA certification, a great importance for the sector, has concordantly been the first company in Turkey, the Middle East and neighbouring countries. The company has established an AMCA accredited testing laboratory, which has only a few examples in the world, and will provide AMCA-approved fan performance testing services to other companies.

Aironn, a leading company that manufactures fans for tunnels, parking facilities and all kind of structures, has achieved a phenomenal success. The company, which manufactures fan systems for many international and domestic projects, including prestigious structures such as ongoing tunnel constructions in North Marmara Motorway, city hospitals and Istanbul Airport in Turkey, has established an AMCA-accredited fan testing laboratary, a great importance for the sector, as a result of its R&D efforts in the last two years. This certificate has enabled the company to verify the quality of the products it manufactures at world standards.

In the fan systems industry, with approximately 150 million Euros of annual import value, Aironn aims to open up to the world with its products, the quality of which has been proved in its own test laboratory. The company, which is a 100 percent domestic investment, aims to increase exports by reducing imports. Ugur Akgul, one of the company officials who made a statement on the subject, stated that the test laboratory they established as a local company has enabled them to export to the whole world. Akgul also said “AMCA is the world's greatest authority for fans. For two years, we have been intensively working with the aim to acquire AMCA accreditation for our Fan Performance Testing Laboratory. Our efforts have finally paid off and our laboratory has been accredited by AMCA. This is not only a source of pride for us, but also for our country. Because there are very few AMCA accredited fan testing laboratories worldwide, and ours has become the first and only one in our country. There is no laboratory accredited by AMCA in any of our neighbouring countries including the Middle East and Turkic Republics. This laboratory will be eligible to perform fan performance measurements, the accuracy of which will be approved by AMCA, for not only Aironn branded fans but also for the products of any other organization. This laboratory verifies all technical data of the fans. The tests can be monitored simultaneously from anywhere in the world via the cameras located at various points in the laboratory. ”

"It is possible to see the name of Aironn behind any great investment in Turkey." 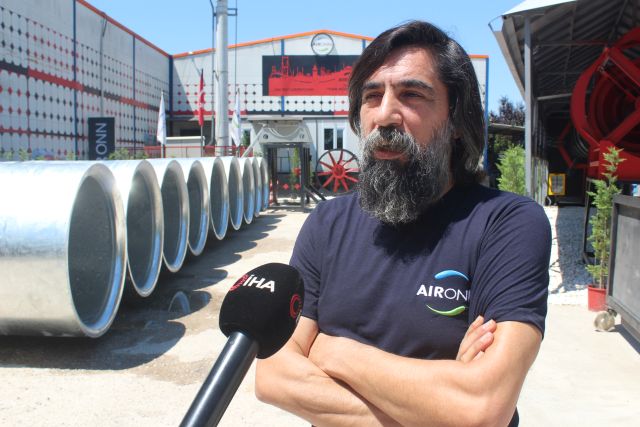 Giving information about company activities and objectives, Akgul said "In our sector, 150 million euros worth of fans are imported into Turkey annually. We, as Turkish engineers, are much better suited to manufacure these fans.   We are a company that has achieved this.  One can find that we have important references nationally. 3. Airport is one of the investments known by the public. 3. He said "Aironn manufactured all of the fans in the tunnels at the     airport. Many city hospitals also have Aironn brand fans. It is possible to see the name of Aironn behind any great investment in Turkey. This is because of the fact that we have a solid engineering infrastructure. You cannot   standardize this quality process without having a solid engineering infrastructure. And we do not stop here. In parallel with R&D, we are a company that attaches great importance to university-industry cooperation. We   continuously carry out ongoing projects with universities in Turkey and foreign countries."

"This test setup is, in fact, a source of pride for us and our country."

Stating that they can test the technical performance of the products they manufacture in the AMCA certified fan testing laboratory as well as the products of different companies, Akgul mentioned that they could obtain greater   sales abroad thanks to this certified test center and said "This test setup you have seen is actually a source of pride for us and the country. Fan laws, for us, mean AMCA. This test setup is a great success for our country as well as   for us. AMCA (Air Movement and Control Association), founded by associations with more than a hundred years of history, is an international, non-profit, non-governmental organization that develops fan laws worldwide. AMCA is the developer of internationally recognized standards for fans and ventilation products.

With this AMCA-approved test setup, we can now sell to the world.  We knew that our engineering was precise in the first place, and now we are able to carry out international validation and certification."

"I strongly believe that Aironn will greatly contribute to the fan industry in Turkey."

Stating that they aimed to reduce the number of fans imported in Turkey and create a national brand by putting the fans they manufacture on the foreign market, Ugur Akgul said "We can also provide services to other national   companies. Generally, Turkish people tend to prefer individual investments. Aironn, on the contrary, invests all it earns in R&D, software, people and high-tech equipment. We set out with the notion of how we can carry the   company over to the 2nd and 3rd generations. Such success is the product of this notion. Our goal here is not only to make money, but to become an international brand. The importance of domestic and national concepts has been widely emphasized in recent years, but in reality it does not go beyond verbal statements. It is important that domestic and national products are also supported in reality. We actualized this investment completely by our own means. This is only the beginning. We have many more projects to come. I strongly believe that Aironn will greatly contribute to the fan industry in Turkey."